Introduction
In Half-Life 2, Standoffs are an important, yet little known tool for staging combat encounters with Combine Soldiers and Metropolice.  Valve’s example, which was previously distributed in the Source SDK, demonstrated its usage in a Rebels vs. Combine battle.  In fact, the standoff system is useful on a more general level.  They encourage the Combine to take a cautious, tactical approach, moving in and out of cover in a manner not unlike the Locust forces in Gears of War.  In this tutorial, I want to go over how I implement them in my battles.  I will focus on npc_combine_s, the Combine Soldier, but this approach is easily adapted to Metropolice as well.  The names I provide are simply references – you can name things however you want, as long as you keep the relationships the same.

What You Need
First, you need a fairly ordinary setup for spawning enemies.  If you already know how to do this, you can just note the npc_combine_s settings below.
Now, the entities responsible for the standoff.
Assembly
Here is a placement example.  In this scene from my CombinationVille map, three Combine will run along the green lines to reach cover.  They will attempt to stay behind the battle line, shown in red. 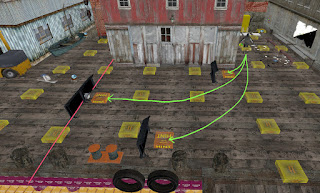